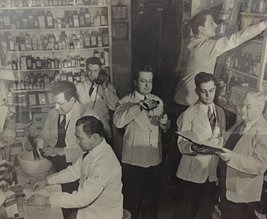 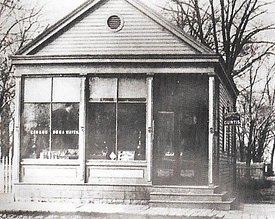 The Winkelmann family pharmacy at the corner of Meramec and Virginia has been passed through four generations with an emphasis on family, community, and tradition.  Dan Winkelmann Jr. has been working in the pharmacy trade since he was a boy.  His father Daniel most likely started in the same fashion after spending hours in the pharmacy watching his father Ernst.  Dan Winkelmann III, Ernst's great grandson, is the fourth generation of the Winkelmann family to become a pharmacist.

Ernst A. Winkelmann, with his brothers Henry and Christopher, incorporated Winkelmann Pharmacy on July 8, 1913.  At that time it was known as Winkelmann-Kirka Drug Co. and was originally called Maryville Pharmacy.  The shop, located at the corner of Meramec and Virginia in Downtown Dutchtown, has remained a pillar in the community due to its focus on family and community.

With the population in the neighborhood shifting and patients' needs changing, finding new patients was a challenge. However, with some creative thinking,  Winkelmann Pharmacy reached out to local nursing homes to provide prescription and various consultations serivices for their residents. In addition, satisfied existing customers' "word of month" recommendations have helped retain and bring in new customers.  Recently,  the current resurgence of new businesses popping up in the Downtown Dutchtown area, there has been an increase in foot traffic into the neighborhood stores and back into our pharamacy.

Another reason we are able to retain a strong customer base is because we remain competitive and fair in our pricing of items. You can find the same product from a larger retail chain at the same or even lower price. We offer patients advice on thier medications that are personalized for their individual health care needs. We go the extra mile to assist with insurance coverage as well.  In addition, Dan and Dr. Haley are able to give various inmunizations. Come see for yourself.

Your Independent Neighborhood Pharmacy since 1913